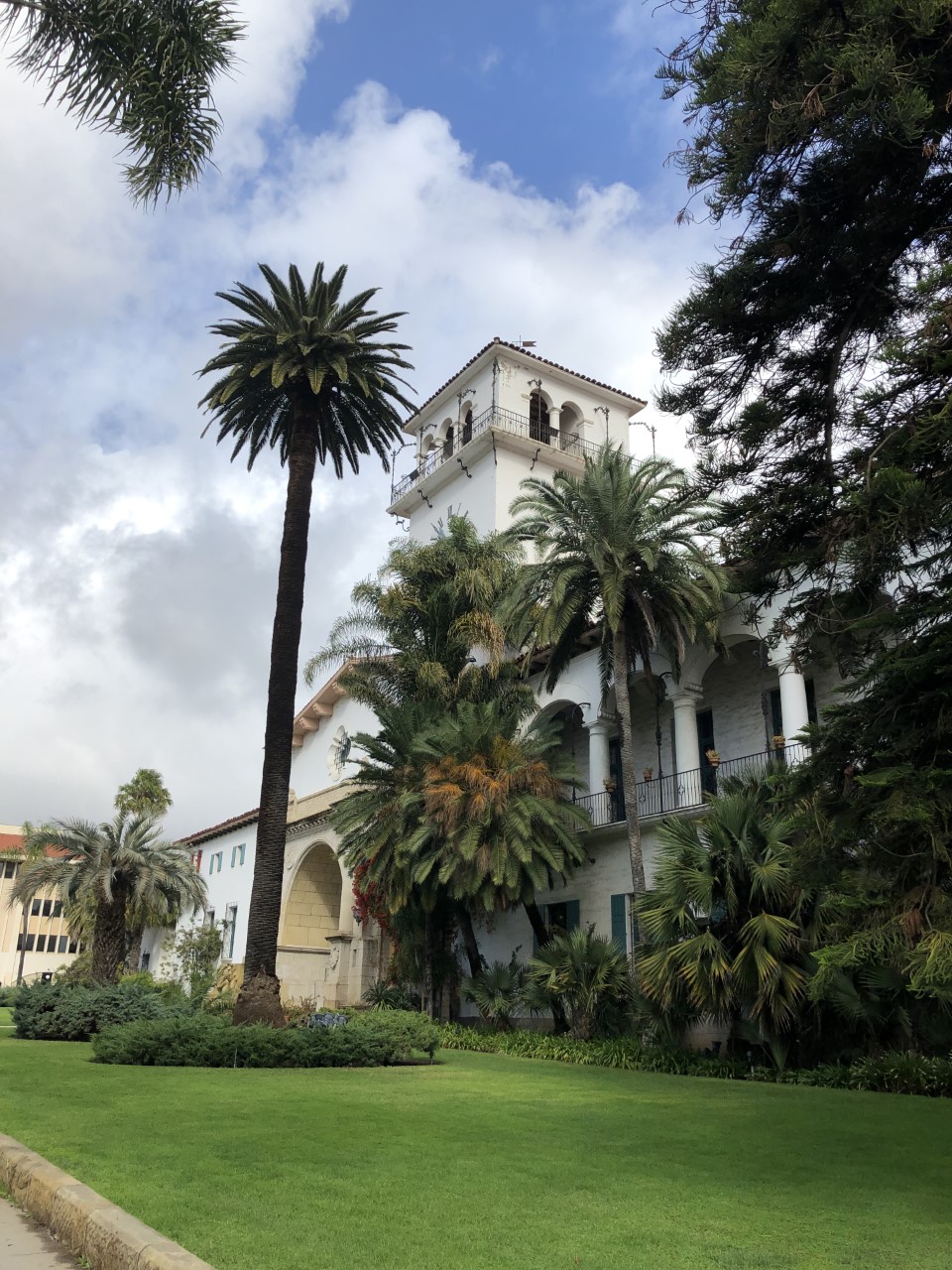 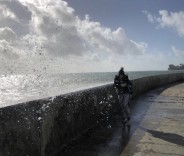 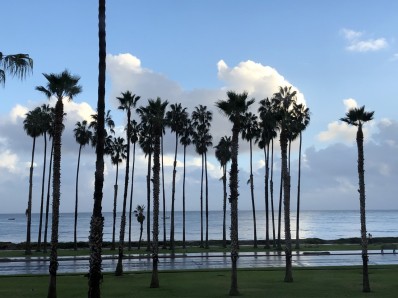 Our next adventure took us to Santa Barbara as we had granny over from the UK for three weeks and managed to escape from the children for a night. We decided to leave home at 5.30am to miss the rush hour, so we packed and showered the night before and set our alarms for 5.15am. At 4.30am the littlest one had a terrible nose bleed, so you can imagine we were very tired on leaving at 5.3Oam.

The forecast had said there would be rain, but I didn’t want to believe it. This is California, we just don’t expect rain! Well it rained for a lot of the journey, which meant the traffic was worse than usual and we didn’t arrive in Santa Barbara until 10.30am, so the journey took 5 hours. I was hoping Santa Barbara was worth it!

One of the first things we noticed were the gorgeous Mediterranean style buildings, the reason they call it the American Riviera. It felt so different to Orange County and LA that we had just driven through. We didn’t have a clue what to do once we got there but noticed a little visitor centre, and the people working there were so helpful, giving us maps and ideas of where to go and what to do.

The first thing we did was head to the County Courthouse which is a Spanish-Moorish architectural landmark with an 80 foot clock tower that you can climb. This gives you a spectacular 360-degree view of the area and even the weather couldn’t spoil that. The courthouse is still in use today, so you can’t go in to all the rooms, but you can still wonder around the building for free. I must add that parking in downtown is easy, with more than ten parking lots you will be sure to find parking near to where you want to be.

Next we headed north of downtown, to visit the Mission. It is known as the ‘queen of the missions’ and is the 10th of the 21 Franciscan missions in California. Another stunning building with an interesting history and pillars just the right shade of pink, so on trend they could appear in a current interior’s magazine.

The rain had subsided, so we headed to the harbour and walked along the harbour wall.  We got soaked by the huge breaking waves hitting the wall. This meant it was time to head inside and warm up, so we decided to try Brophy Bros. for lunch. We managed to get a great table with harbour views and sampled the most delicious clam chowder I’ve ever tasted, along with some shrimps and sword fish. 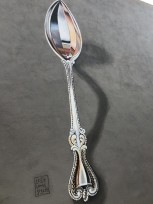 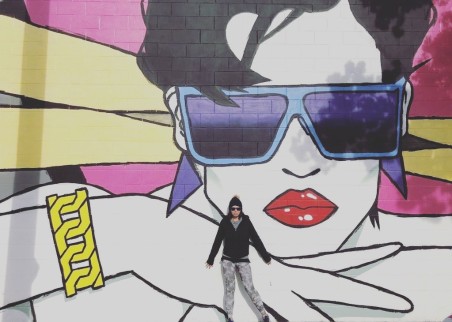 By this time we were getting tired as we had been up for so long but decided to visit the funk zone before checking into our hotel. The funk zone is full of wine tasting rooms, little shops and restaurants. It’s such a fun place to walk around with cool wall art and unique buildings, but we got caught in torrential rain so made our way to the hotel.  We stayed at the Hilton Santa Barbara Beachfront Resort and wasn’t very busy which is always great, but I guess we were out of season. The service was wonderful, the hotel was clean and stylishly decorated, the rooms spacious and most importantly the beds were comfortable. We had a little cocktail in the bar, the seasonal pumpkin spiced martini was like desert in a glass, and then we headed up to our room for a little nap before dinner.

During the day we had seen a lovely looking tapas bar called Loquita, which we booked for dinner. We took a taxi as it was a chilly night, but at least the rain had stopped. I cannot recommend this restaurant enough. Having eaten tapas in Spain many times I can confirm that while the flavours were authentic, they had managed to put a new and interesting spin on traditional tapas. The atmosphere was lively, and the staff were really friendly, but my highlight was the churros. I adore churros, but it can often be a little greasy. The churros here was perfectly cooked with just the right amount of cinnamon and came with not just a chocolate dipping sauce but also a lemon one and dulce de leche. I couldn’t eat it all so took it back to the hotel which was the perfect decision as I was pretty full in the restaurant but after the twenty-minute walk back to the hotel I was ready for more. 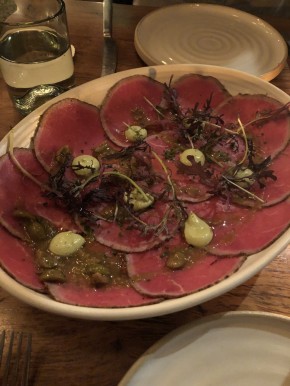 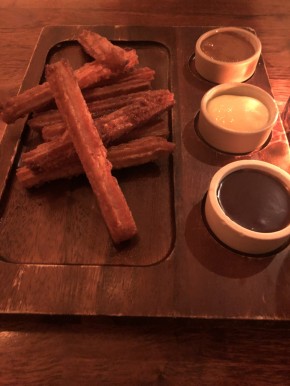 The next morning we woke up to glorious sunshine, California at its best.  We had coffee on our balcony with views of palm trees and the Ocean. We were heading back to Orange County that day but first we were off to fulfil one of my biggest dreams, to ride a horse on the beach.

We headed to Summerland to Santa Barbara Beach Rides (www.sbbeachrides.com) where we met with Charlie (very stern at times but in an endearing way) and Paco (super friendly and knowledgeable about the area). I haven’t ridden since I was a child, so I was a little nervous but mostly excited. My husband was lacking in excitement, and mostly just concerned about being kicked or thrown off. My horse was called Scarlet and apart from a couple of moments where I was forced to show off my rodeo skills, she was a magnificent horse. Riding on the beach was a dream come true, honestly it was everything I had hoped it would be, riding on this powerful creature as the waves lapped her hooves. I probably shouldn’t have done it as I was in agony later that night due to my Ehlers Danlos Syndrome and my useless bones but it was worth it and I hope I get to do it again one day.

We headed home feeling content and with memories that will stay forever and it took less than four hours to get home which isn’t too bad.

Santa Barbara was different to most places I have visited in California so far. It felt warm, friendly, relaxed, genuine, lived in, somehow familiar like an old aunt you haven’t seen for years, but a cool one that you wished you saw more often. There were so many places to eat and drink, independent shops and museums. We will be back to explore more as I feel like we barely touched the surface.

Thank-you Santa Barbara, you were wonderful, next adventure……. Lake Arrowhead.